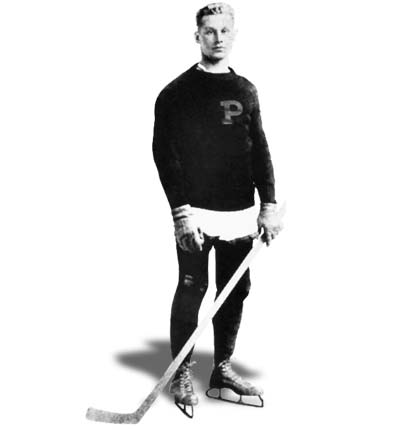 Hobart "Hobey" Baker was arguably the first hockey legend born in the United States. His standard of achievement both on and off the ice elevated him to unique status in that country's hockey world. Baker's most passionate conviction was that the game should be played with the utmost sportsmanship in addition to skill to preserve its integrity.

Baker spent two years at St. Paul's School in Concord, New Hampshire, from 1908 to 1910. It was here that he first crafted the reputation of being a tremendous and versatile athlete as well as a gentleman in competition. Baker vowed to take his skating and puckhandling ability to the highest level in order to compensate for his lack of size.

By the time he entered Princeton University in 1910, Baker was an extremely well-rounded sportsman. The budding star led the Tigers through an undefeated season in 1911-12 that culminated in an intercollegiate championship. As a rover, he was given the freedom to improvise and display his immense ability all over the ice. Baker became well known for his end-to-end rushes and an unheard of level of stamina that enabled him to dominate an entire game. He was such a one-man show at times that the Princeton squad came to be known as "Baker and Six Other Players."

His high-quality performance was augmented by his concern should any fouls take place during a game, even if he wasn't involved. He also made a habit of venturing into the opposition's dressing room after the game to congratulate them on a fine effort.

Baker left college captaining the Tigers to another collegiate title in his senior year of 1913-14. He also served as captain of the school's varsity football team, where he received accolades equal to those he earned while starring on the ice. Throughout his entire college program, he matched his athletic achievements with exemplary scholastic results, becoming a role model for students whether or not they were involved in sports.

Following his graduation, Baker suited up for the St. Nicholas Hockey Club, an amateur team in New York City, where each player was required to pay his own way to participate. Although he caught the attention of professional clubs, Baker's intention was always to play hockey for the sheer enjoyment of it. He left the game during the First World War and distinguished himself as a pilot. He was awarded the Croix de Guerre for his superior conduct under fire. Tragically, Baker lost his life after a plane he was test-piloting crashed in Toul, France. Baker was scheduled to leave France and return home mere hours later. The various symbols of achievement affiliated with his name provide testimony to Baker's remarkable legacy. The Hobey Baker Memorial Award is presented annually to the outstanding collegiate hockey player in the United States. Each year, the Hobey Baker Stick is awarded at his old prep school in Concord while the Princeton Tigers named their hockey arena after their most famous player. Baker is a member of the United States Hockey Hall of Fame and the College Football Hall of Fame. In 1945 he was part of the initial group of players elected to the Hockey Hall of Fame. 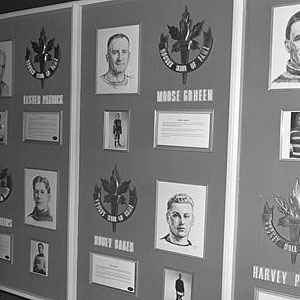 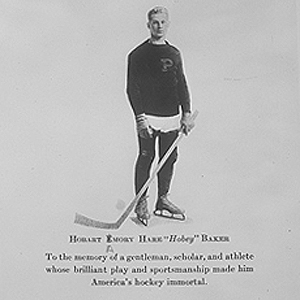