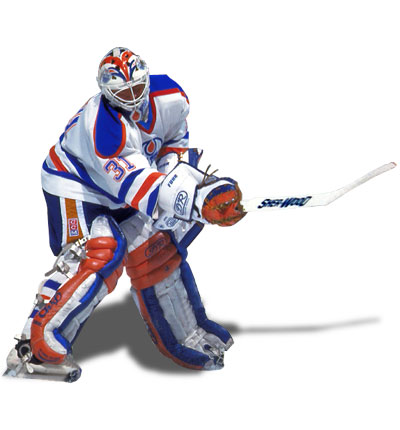 Grant Fuhr was born in Spruce Grove, Alberta, located just outside the city of Edmonton where he would star for so many years. Fuhr starred with the WHL's Victoria Cougars for two seasons and was a First Team All-Star both years (1980 and 1981). Grant was drafted in the first round by the Edmonton Oilers in the 1981 NHL Entry Draft.

Over a 10-year period, Grant Fuhr led the Oilers to five Stanley Cup championships between 1984 and 1990. Without a doubt, his best year was in 1987. Fuhr was a workhorse, accumulating a league-leading 4,304 minutes played and 40 wins. He earned his sole Vezina Trophy as the league's best goaltender and was runner-up to teammate Wayne Gretzky for the Hart Trophy as the NHL's most valuable player. During the 1983-1984 season, Fuhr collected 14 points, which still stands as the single-season record for most points by a goaltender.

By the end of the 1980s and early 1990s, the Oilers began to dismantle the team by trading Wayne Gretzky, the start of a fire sale. Then, on September 19, 1991, after playing only 13 games for the Oilers, the six-time All-Star was traded to the Toronto Maple Leafs in a seven-player blockbuster deal

Fuhr was then traded by the Leafs to the Buffalo Sabres on February 2, 1993, where he partnered with highly-acclaimed Dominik Hasek. In 1994, Fuhr joined Hasek in winning the William Jennings Trophy for the fewest goals scored against. In the 1994-95 season, Fuhr was traded to the Los Angeles Kings where he joined Gretzky, but he played only 14 games for the franchise.

In 1995-96, just as many began to think that this once great goaltender was past his prime, he signed as a free agent with the St. Louis Blues. Given another chance, the classy veteran didn't disappoint. Fuhr played with a renewed love for the game and an energy that matched any youngster in the league. He played an astonishing 79 games for the Blues, 76 consecutively. Both remain single-season records. Grant's great play continued into the playoffs that year. He was once again in fine form and gave Blues' fans high hopes for a Stanley Cup championship. Unfortunately, the playoff run ended prematurely when Maple Leafs' forward Nick Kypreos crashed into Fuhr as he was attempting to cover the puck. His leg twisted awkwardly and he tore his knee ligaments.

In the 1996-97 season, Grant continued his fine play for the Blues, but he couldn't lead his team over the hump during the playoffs. Over the next two years, injuries became a problem. His knee injury never seemed to recover and time was passing quickly. St. Louis began to look in another direction, picking up Roman Turek from the Dallas Stars to be their number one goaltender. That left the door open for Grant to be traded. On September 4, 1999, Fuhr was sent to an old Oilers' archrival, the Calgary Flames.

The Calgary Flames expected Grant to take the younger goaltenders under his wing and give some much needed leadership in the locker room. One of those youngsters between the pipes was Fred Brathwaite. In 1993 he'd been an up and comer in the Edmonton Oilers organization and was asked to wear number 31, which Grant Fuhr had worn in his Oilers heyday and throughout his career. The Oilers called Grant to ask his permission for Brathwaite to don his idol's number. He answered, "No problem. Go for it."

As a Flame, Grant joined an elite club of goaltenders. On October 22, he defeated the Florida Panthers to attain his 400th career win -- only the sixth goalie in NHL history to reach that milestone, joining the likes of Terry Sawchuk, Jacques Plante, Tony Esposito, Glenn Hall and Patrick Roy. Prior to the 2000-01 season, Grant Fuhr announced his retirement from professional hockey.

Fittingly, in Fuhr's first year of eligibility, he was selected to the Hockey Hall of Fame in 2003. 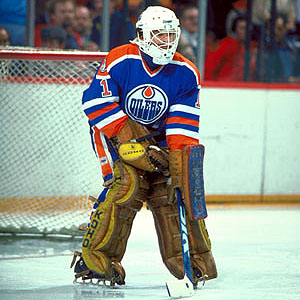 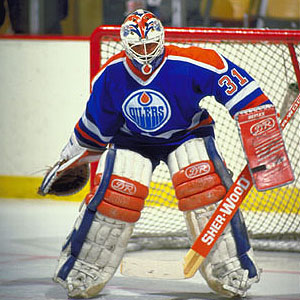 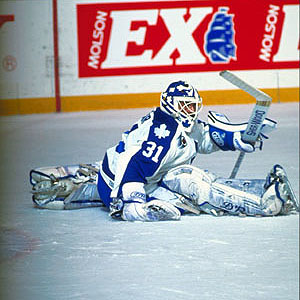 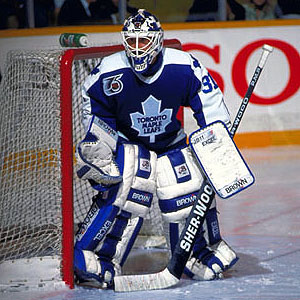 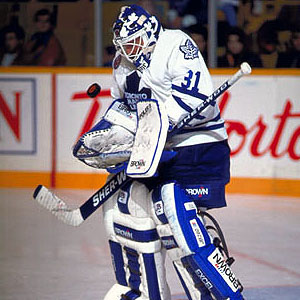 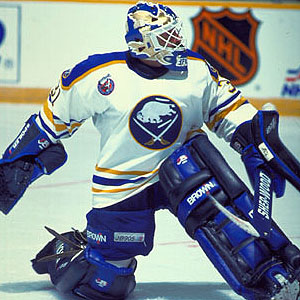 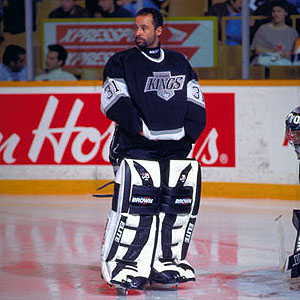 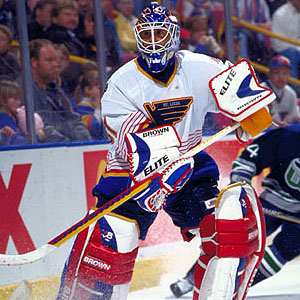 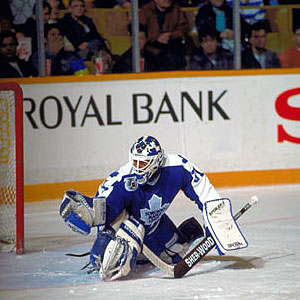 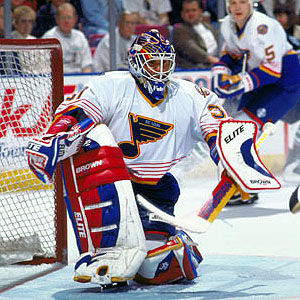 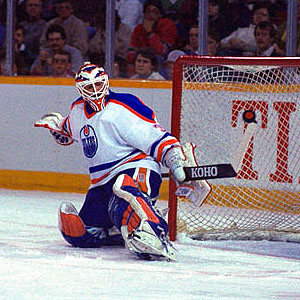 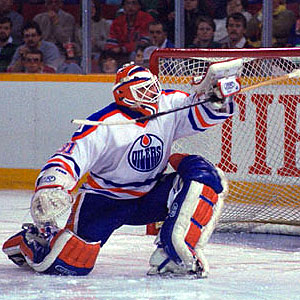 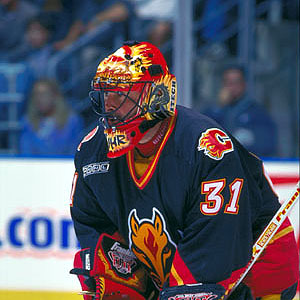 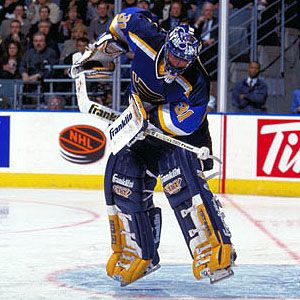 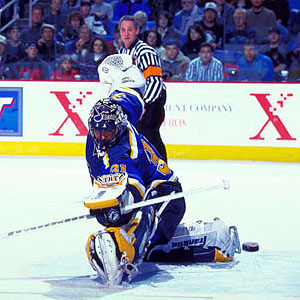 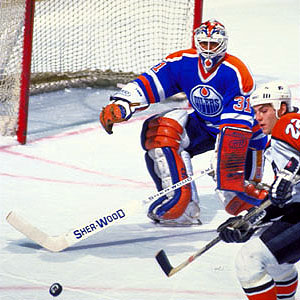 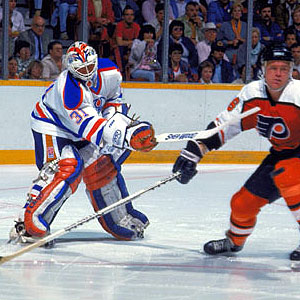 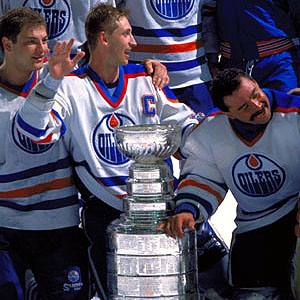 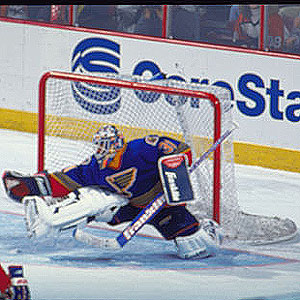 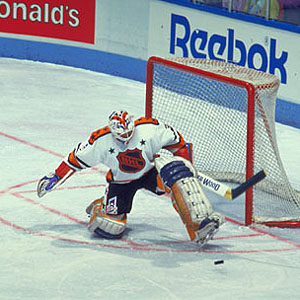 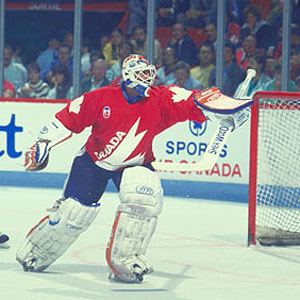 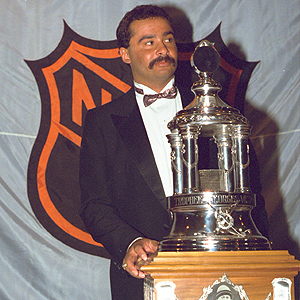 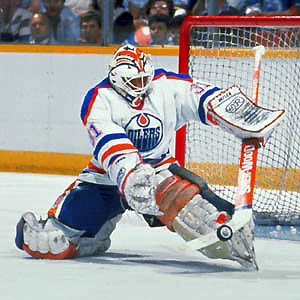 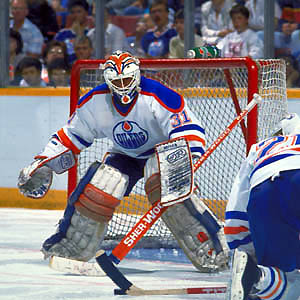 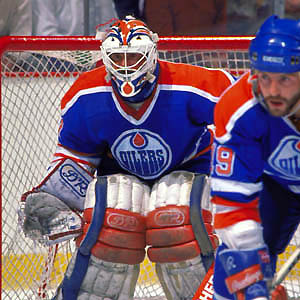 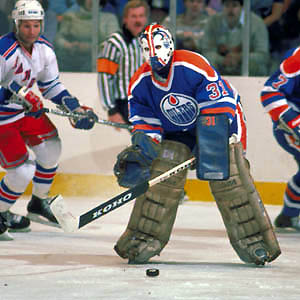 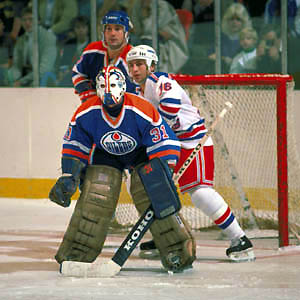