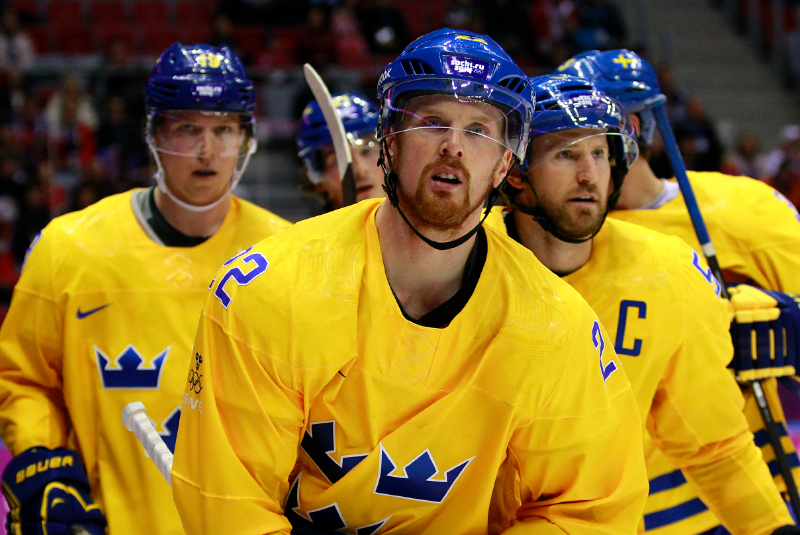 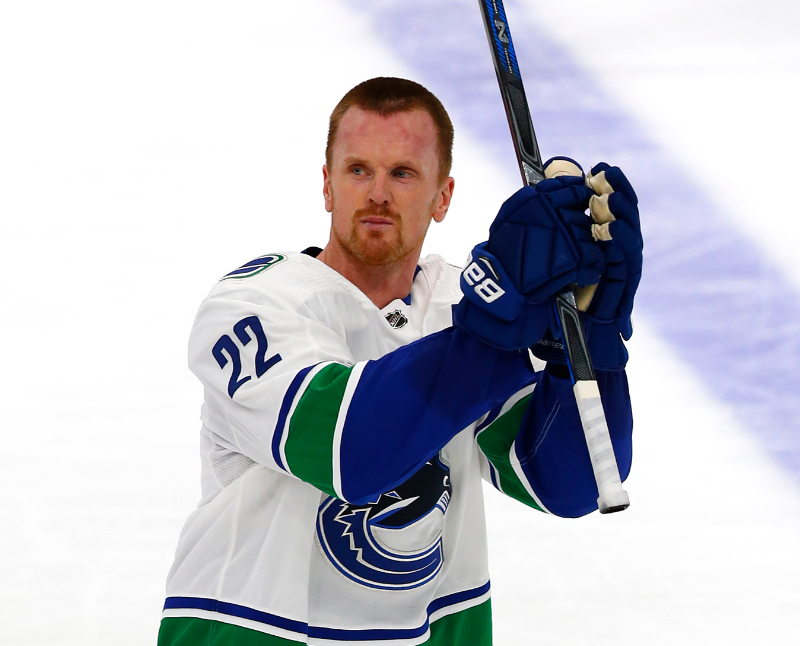 Sedin salutes the crowd after playing his final game in Vancover. (Perry Nelson/HHOF)

Throughout his career, Daniel Sedin was known as a goal-scorer, often finishing plays initiated by his twin brother, Henrik. However, Daniel was equally proficient as a playmaker. Over his 18-season NHL career, played exclusively with the Vancouver Canucks, Daniel amassed 1,041 points to rank second all-time in Canucks franchise history.

Daniel Sedin was born on September 26, 1980, in Örnsköldsvik, Sweden, just six minutes after his identical twin brother, Henrik. The twins began playing organized hockey at the age of eight, although they seldom played on the same line until Daniel switched to wing from centre at 14.

By the time they were 16, both Sedins had begun playing professionally with Modo Hockey in the Swedish Hockey League. In his second season, Daniel led Modo in scoring and helped the club achieve the second regular season title in franchise history. At the conclusion of the season, Daniel and Henrik were named co-recipients of the Golden Puck as the Swedish player(s) of the year.

By the 1999 NHL Entry Draft, the Sedins were considered top prospects and were expected to be selected early in the first round and they expected to be selected by separate teams. However, Brian Burke, the general manager of the Vancouver Canucks, was determined to draft both Sedins. The Canucks already possessed the third overall pick, and through a series of transactions, Burke was able to obtain the second overall pick, and used his two selections to choose both Daniel and Henrik.

They both returned to Modo to play one more season before joining Vancouver for the 2000-01 NHL season, becoming just the fourth pair of twins to play in the NHL. Daniel finished his rookie season with 20 goals and 34 points.

After emerging as one of the best players on the team during the 2005-06 season, Daniel recorded six consecutive seasons with 20 or more goals and 70 or more points. In 2006-07, Daniel led the team in scoring with 36 goals and 84 points.

Sedin salutes the crowd after playing his final game in Vancover. (Perry Nelson/HHOF)

Prior to the 2010-11 season, Daniel Sedin was named an alternate captain for the Canucks. During that season, Daniel competed in his first NHL All-Star Game. During the Skills Competition, he won the shooting accuracy contest. As the season resumed, Daniel went on to finish the season with a career-high 104 points, comprised of 41 goals and 63 assists, and earned the Art Ross Trophy as the NHL’s top scorer. That season, the Canucks finished first to win the Presidents’ Trophy and went on to face the Boston Bruins in the Stanley Cup Final, but lost in a close seven-game series. At the NHL Awards, Daniel accepted the Art Ross Trophy, but also received the Ted Lindsay Award as the NHL’s most valuable player as voted by his fellow NHL players. He was the runner-up for the Hart Trophy and was voted onto the NHL’s First All-Star Team.

During the 2011-12 season, Daniel was again selected to play in the All-Star Game. He later suffered a concussion that shortened his season, but still finished with 30 goals and 67 points, and was an integral reason that the Canucks finished first again.

Daniel scored his 347th career goal on January 21, 2016 to become the highest-scoring Canuck. He was named to the NHL All-Star Game for a third time that season.

The Sedins both played their final NHL game on April 7, 2018. Daniel Sedin concluded his career having played 1,306 regular season games through 17 seasons. He scored 393 goals and assisted on 648 for a total of 1,041 points. In playoff action, he added 25 goals and 46 assists for 71 points in 102 games. Despite their retirement, the Sedin twins were jointly awarded the King Clancy Trophy for the player(s) who best exemplifies leadership qualities on and off the ice and gives back to his community. The Vancouver Canucks retired the numbers of both Sedins – Daniel’s 22 as well as Henrik’s 33 – in February 2020.

In 2022, Daniel Sedin was inducted into the Hockey Hall of Fame in the Player Category.