The Hockey Hall of Fame Selection Committee consists of eighteen (18) individuals appointed by the Board of Directors, whose mandate is to nominate and elect candidates as Honoured Members in:

Each individual appointed to the Hockey Hall of Fame Selection Committee in accordance with By-law No. 28 shall, in the opinion of the Board of Directors, be:

It is intended that the Selection Committee:


Six members of the Selection Committee shall continue to be appointed annually for terms of three (3) years each so that each year, the terms of six (6) members expire and the terms of six (6) newly appointed or reappointed members commence. Members of the Selection Committee whose terms expire may be reappointed for a further term, subject to an aggregate limit of fifteen (15) years of service (except as otherwise extended by "special resolution" of the Board of Directors). 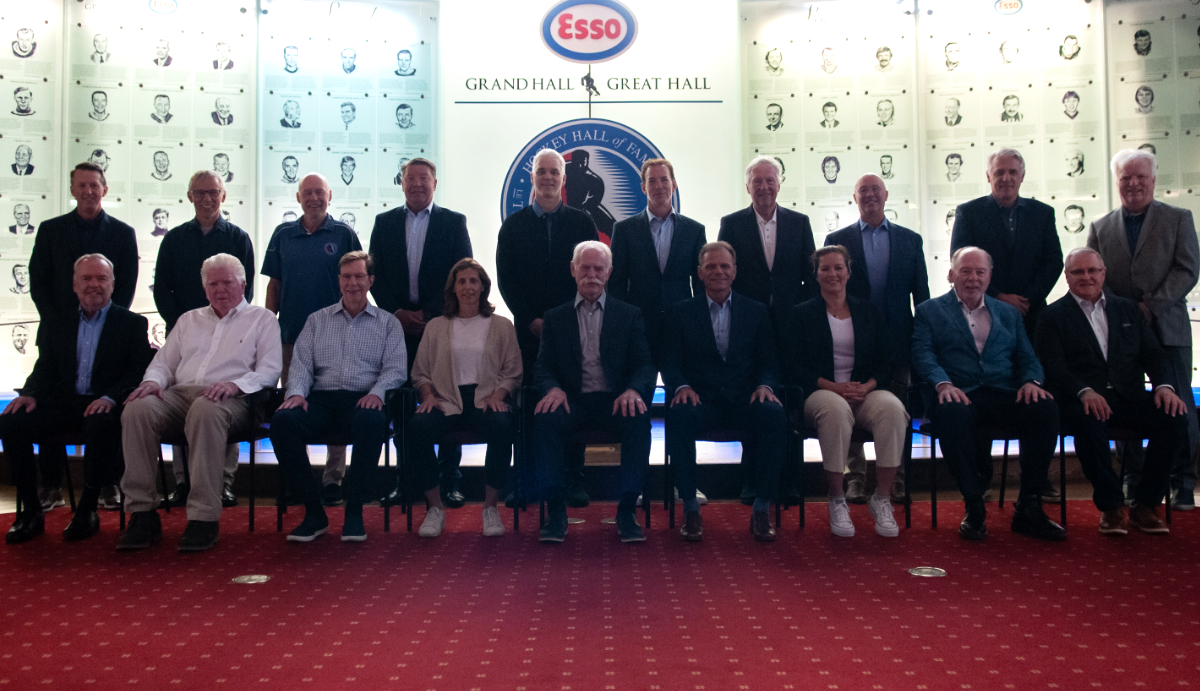 John Davidson, Chair
A native of Ottawa, Ontario, John Davidson played in over 300 regular season games from 1973 to 1983 in the National Hockey League with St Louis and the New York Rangers. He became a veteran in the media circuit as a hockey analyst including work with Hockey Night in Canada and the Hot Stove Lounge, ESPN, ABC and the MSG Network. Davidson previously served as the President of Hockey Operations for the St. Louis Blues and took on the same role for the Columbus Blue Jackets on October 24, 2012. On April 1, 2014, Davidson succeeded Jim Gregory as Chair of the Hockey Hall of Fame Selection Committee.

David Branch
Born and raised in Bathurst, New Brunswick, David Branch has served as the Commissioner of the Ontario Hockey League since August 11, 1979, and as the President of the Canadian Hockey League since 1996. Under his command, the OHL has grown from 12 teams to 20 and is now a high profile marketable product, with multiple games broadcast on television and radio.

Brian Burke
Born in Providence, Rhode Island and raised in Edina, Minnesota Brian Burke earned his law degree at the prestigious Harvard University and began serving as an NHL player agent following graduation. He has served as the NHL's Executive Vice President and Director of Hockey Operations, the General Manager of the Hartford Whalers, Vancouver Canucks, Anaheim Ducks as well as the President and General Manager of the Toronto Maple Leafs.

Mark Chipman
Winnipeg-native Mark Chipman is the Executive Chairman of the Board of True North Sports & Entertainment and the Winnipeg Jets. He represents the Jets on the NHL’s Board of Governors and in 2016 was appointed to the Executive Committee. Along with business partner David Thompson, Chipman led the team that acquired and relocated the Atlanta Thrashers to Winnipeg in 2011.

Bob Clarke
Serving as captain of the Philadelphia Flyers "Broad Street Bullies" teams of the 1970's, Bob Clarke led the club to back-to-back Stanley Cup championships in 1974 and 1975. Upon completion of his playing career Clarke would become the fourth general manager in Flyers history. In over 40 years with the Flyers franchise Clarke has served as President, Senior Vice President and General Manager. He also spent time as the Vice President and General Manager of the Florida Panthers (1993-94) and the Minnesota North Stars (1990-92).

Marc de Foy
Marc de Foy has covered hockey in Montreal for more than 30 years. During that time de Foy has earned the respect of the hockey world by routinely breaking stories and by consistently producing honest and accurate copy. In 2010 he was awarded the Elmer Ferguson Memorial Award for hockey journalism.

Michael Farber
Following 15 years as an accomplished sports columnist for the Montreal Gazette, Micheal Farber became senior writer with Sports Illustrated in 1994 and now stands as one of the magazine's top journalists. Farber, a New Jersey native, received the Elmer Ferguson Award for distinguished hockey writing in 2003.

Ron Francis
Hockey Hall of Fame Honoured Member, Ron Francis, ranks second on the NHL all-time assist list and is a two-time Stanley Cup champion. At the completion of his playing career, the long-time Carolina Hurricanes captain would serve the club in a variety of capacities before being named the executive vice president and general manager on April 24, 2014. The Hurricanes officially retired Francis' No. 10 jersey on January 28, 2006.

Mike Gartner
After an illustrious hockey career that combined unrivalled skating speed with a scoring prowess that netted 708 goals, Mike Gartner was elected to the Hockey Hall of Fame in 2001. He represented Canada at numerous international tournaments including multiple World Championships and Canada Cups and later served as President of the NHLPA for the latter part of the 1990s.

Anders Hedberg
Born in Örnsköldsvik, Sweden, Anders Hedberg is regarded as one of the first European-born players to make an impact on North American hockey. Following a standout playing career, Hedberg went on to serve in various front office capacities with the New York Rangers, Toronto Maple Leafs and Ottawa Senators. In 2000 he was appointed General Manager of the Swedish national team and was elected to the Swedish Hockey Hall of Fame in 2012.

Jari Kurri
Hockey Hall of Fame Honoured Member, Jari Kurri, was one of the most feared snipers in NHL history and key contributor to the Edmonton Oilers five Stanley Cup wins between 1984 and 1990. With his playing days behind him, Kurri took on the role of general manager of the Finnish national team in 2003 and is currently the general manger of Jokerit, the first Finnish KHL league team.

Igor Larionov
In one of the most decorated careers the game of hockey has ever seen, Igor Larionov was an icon of international play before he ever joined the NHL. Twice an Olympic gold medalist and four times a World Champion, Larionov was 29 when he finally played his first National Hockey League game. He would go on to win three Stanley Cup championships with the Detroit Red Wings and was elected to the Hockey Hall of Fame in 2008.

Pierre McGuire
Recognized as one of the most well-versed analysts in the game of hockey, Pierre McGuire began his NHL career as an assistant coach with the Pittsburgh Penguins, with whom he won a Stanley Cup in 1992. After stops in Hartford and Ottawa, he embarked on a broadcasting career which now spans more than 20 years, starting in Canada with TSN where he served as lead hockey analyst and then in the United States for NBC Sports as part of their lead NHL broadcast team.

Bob McKenzie
One of the most connected and trusted analysts in the world of hockey, Bob McKenzie served as editor-in-chief of The Hockey News and then as a hockey columnist for The Toronto Star before joining TSN in the late 1980's. Since that time McKenzie's NHL and international hockey coverage has raised the standard for an entire industry. In 2013 McKenzie was named one of the 20 most powerful figures in sports media by Sports Illustrated.

Mike Murphy
Murphy played in the National Hockey League for 13 seasons (1971-1983) as a member of the St. Louis Blues, New York Rangers and Los Angeles Kings. He also performed Assistant and Head Coach duties with the Los Angeles Kings, Ottawa Senators, Vancouver Canucks, Toronto Maple Leafs and New York Rangers. Murphy currently serves as the NHL’s Senior Vice President of Hockey Operations, a role in which he has managed all operations of the “Situation Room” for the majority of his 20-year tenure.

David Poile
David Poile is one of the longest-tenured General Managers in NHL history. He spent 15 years in that capacity for the Washington Capitals (1982-1997) before joining the Nashville Predators as the first (and only) GM in franchise history. He guided both the Capitals and Predators for over 1,000 games and 500 victories and is the only GM to accomplish that feat with two different teams. On the international stage Poile served as General Manager for the United States team at the 2014 Olympic Winter games held in Sochi, Russia.

Luc Robitaille
Hockey Hall of Fame Honoured Member, Luc Robitaille, is the highest scoring left winger in NHL history and the Los Angeles Kings all-time leading goal scorer. Upon retiring as a player, Robitaille, joined the Kings front office staff where he serves as President, Business Operations. In this role, Robitaille and the Kings captured the first Stanley Cup title in franchise history in 2012. On January 20, 2007, Robitaille became the fifth Kings player to have his number retired by the club.

On April 27, 1958, for the first time, a Selection Committee was formed to elect Honoured Members to be inducted into the Hockey Hall of Fame. Prior to that date, the board of directors had handled all affairs pertaining to The Hall, including the election of Honoured Members.

The following list includes all those who have participated in the election: