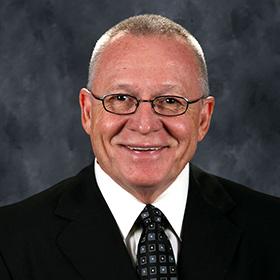 Jim Rutherford, born on February 17, 1949, moved into the managerial ranks following a 13-season NHL goaltending career that took him from the Detroit Red Wings to Pittsburgh Penguins, back to Detroit, then on to the Los Angeles Kings and Toronto Maple Leafs before concluding back with the Red Wings for one game in 1982-83.

Peter Karmanos played an integral role in Rutherford’s career. Following Rutherford’s retirement, Karmanos hired him as the Director of Hockey Operations for the Compuware Sports Corporation, a multi-tiered organization that included leagues for youngsters all the way up to a Junior ‘A’ team that competed in the North American Hockey League (NAHL). The organization had been so successful that Mr. Karmanos had approached the Ontario Hockey League in the early 1980’s about the chance of securing a franchise in Detroit. The league convinced him to take over the Windsor Spitfires, a franchise floundering both on and off the ice, and prior to the 1984-85 season, Karmanos bought the team, renamed the team the Windsor Compuware Spitfires and installed Rutherford as the general manager. He stayed with the team through 1987-88, a season in which the Spitfires won the league championship and came within one win of capturing the Memorial Cup, and then left to work with Mr. Karmanos on securing a junior franchise for Detroit. The Spitfires were sold to Windsor owners and in December 1989, Karmanos was awarded an expansion franchise for Detroit; a team to be known as the Detroit Compuware Ambassadors during its first two seasons with Jim Rutherford as the team’s GM. They became the Detroit Jr. Red Wings for three seasons starting in 1992-93, finishing second overall in 1993-94 and 1994-95, and going to the Memorial Cup in the latter season. 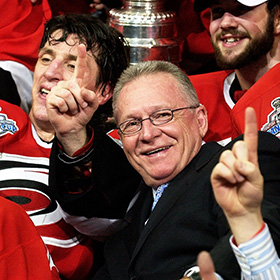 Rutherford has won the Stanley Cup three times in the General Manager role, the first coming in 2006 with the Carolina Hurricanes (Stan Gilliland/HHOF).
During this season, Karmanos and Rutherford lobbied to secure an NHL franchise. They pursued the Detroit Red Wings and Pittsburgh Penguins without success, and then, with the assistance of the Connecticut Development Authority, acquired the Hartford Whalers in June 1994. Jim Rutherford became a part-owner and oversaw hockey operations as well as serving as general manager for the franchise.

A pledge had been made by the new owners that the Whalers would remain in Hartford for at least four seasons, but after two campaigns, frustrated by a lack of support, Karmanos threatened to move the franchise. Hartford was the smallest U.S. market in the NHL, and the Hartford Civic Center was among the smallest arenas in the league. A “Save the Whale” campaign kept the team in Hartford until the conclusion of the 1996-97 season, but by then, Karmanos and Rutherford announced that the team would be relocating. Initial talks discussed Norfolk, Virginia as the intended location, but in May 1997, the announcement was made: the franchise would be moving to North Carolina as the Carolina Hurricanes, and would wear the red and black of the North Carolina State University Wolfpack basketball team. 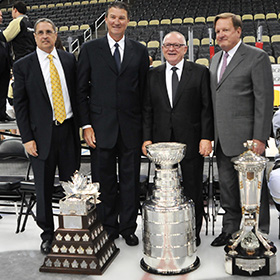 General Manager Jim Rutherford poses with the Stanley Cup following the 2016 Stanley Cup Final when the Pittsburgh Penguins defeated the San Jose Sharks (Craig Campbell/HHOF).
During the first two seasons, the Hurricanes played home games in Greensboro, North Carolina, but moved to Raleigh and its PNC Arena in 1999. Rutherford and his team scouted well, drafting prudently and trading deftly, and in 2001-02, the team progressed all the way to the Stanley Cup Final before being eliminated. But that changed in 2005-06. The team rolled to an astonishing 112-point season, and then defeated the Edmonton Oilers in the Stanley Cup Final to claim hockey’s greatest prize, the first for the franchise and the first professional sports championship for a team from North Carolina. Jim Rutherford was credited with a great deal of the success by working with a small salary cap to stock the championship team with the players for a successful squad.

Carolina missed the playoffs in seven of the following eight seasons, and following the 2013-14 season, Rutherford stepped down as the Hurricanes general manager but remained as team president. Then, in a move that caught much of the hockey world by surprise, on June 6, 2014, Rutherford resigned as president of the Carolina Hurricanes and accepted a position as general manager of the Pittsburgh Penguins. “This is a job that most GMs would love to have,” Rutherford said. “I was very lucky and very fortunate at this point in my career that I could get this opportunity.” At the time, the 65-year-old suggested that he expected to hold the position for two to three years while mentoring his own successor.

Shrewd deals, including rebuilding the Penguins with the addition of players like Carl Hagelin and the much-maligned Phil Kessel prior to the 2015-16 season contributed to a successful season in which the Penguins defeated San Jose to win the Stanley Cup. Rutherford was awarded with the NHL General Manager of the Year Award. The Penguins repeated with a Stanley Cup championship in 2016-17 after defeating Nashville’s Predators.