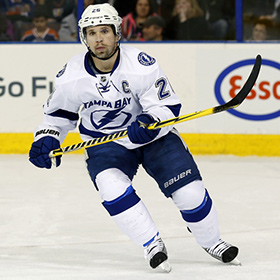 There is something quite satisfying in having an undrafted player not only reach the NHL, but to excel beyond anyone’s wildest expectations. Such is the case with Martin St. Louis.

Born June 18, 1975 in Laval, Quebec, the concerns with St. Louis had nothing to do with his abilities, as he proved over and over, but came down to his height. Undersized compared to his peers, St. Louis was recruited by the University of Vermont Catamounts, and in his freshman season (1993-94), he collected 51 points in 33 games and was named to the East Coast Athletic Conference (ECAC)’s All-Rookie Team. The next season, he had 71 points in 35 games and was named to the ECAC First All-Star Team and was an NCAA All-American for the first of three straight seasons. That was followed by 85 points in 35 games in 1995-96, where he and the Catamounts won the school’s first ECAC championship. He was a finalist for the Hobey Baker Award as the best college hockey player in the United States. Martin retired as Vermont’s all-time leading scorer with 267 points. He was named to the ECAC’s all-decade team of the 1990s. 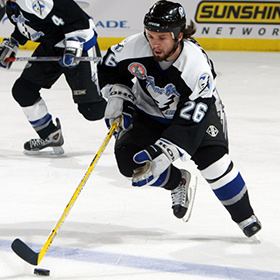 Undrafted by an NHL team, St. Louis earned a try-out with the Ottawa Senators in 1997 but was not signed at the time, but by February 1998, the Calgary Flames signed the outstanding young forward. After being assigned to the Flames’ American Hockey League affiliate in Saint John, he scored 26 points in 25 regular season games, and followed that with 20 points in 20 post-season games. That earned St. Louis elevation to the parent Flames for the 1998-99 NHL season. Although he started the season with Calgary, he was sent back to the AHL after 13 games. He re-joined the NHL Flames part way through the 1999-2000 season and picked up three goals and 18 points in 56 games but the team bought out his contract at the end of that season, making him an unrestricted free agent.

After signing with the Tampa Bay Lightning, St. Louis took a while to warm up, but by the end of the season, had shown creativity and skill, recording 18 goals and 40 points in the process. Martin truly blossomed in 2002-03, scoring 33 goals and playing in his first NHL All-Star Game. There, he finished second in the Fastest Skater competition and first in the Puck Control Relay event at the game’s skills competition.

As a member of Team Canada St. Louis captured Olympic gold in 2014 and a World Cup of Hockey title in 2004. (Jeff Vinnick/HHOF-IIHF-IOC)

2003-04 was even better for St. Louis. He won the Art Ross Trophy as the NHL’s leading regular season scorer, finishing with 94 points. He added the league’s two Most Valuable Player awards, having his name added to both the Hart Trophy and the Pearson Award, as well as being named to the NHL’s First All-Star Team. His 24 points in 23 playoff games helped the Lightning win the franchise’s first Stanley Cup championship.

St. Louis enjoyed his most productive season offensively in 2006-07. He finished with career highs in goals (43) and points (102) and added the Lady Byng Trophy as the league’s most gentlemanly player. The next season, his 99 points placed him second in league scoring, and again, he was the recipient of the Lady Byng. He took home the award a third time in 2012-13. 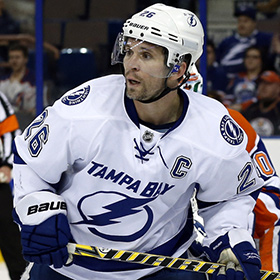 St. Louis was awarded the Art Ross Trophy as the NHL’s leading scorer on two occasions and in 2004 he received the Hart Memorial Trophy as league MVP. (Perry Nelson/Hockey Hall of Fame)

Prior to the 2013-14 season Martin was named captain of the Lightning, but in March 2014, St. Louis waived his no-trade clause for a deal to the New York Rangers for Ryan Callahan and draft picks. During the playoffs that spring, Martin’s mother, France, passed away. The Rangers rallied around him and together, they went to the Stanley Cup Final, but fell short against the Los Angeles Kings.