TORONTO (June 24, 2020) – Lanny McDonald, Chairman of the Hockey Hall of Fame announced today that six individuals have been elected to Hockey Hall of Fame Honoured Membership, in both the Player and Builder Category. The vote took place today at the annual meeting of the Selection Committee in Toronto and remotely in North America and Europe.

Ken Holland began post playing career as a scout with the Detroit Red Wings in 1985. From there he moved up to the post of Assistant General Manager of the Red, while also acting as GM of their American Hockey League affiliate. Named the Detroit Red Wings’ GM in 1997 he then spent 22 seasons in that post winning three Stanley Cup Championships. During his tenure in Detroit his team won more combined regular season and playoff games (1,044) than any other NHL franchise.

"I am incredibly humbled by this honour," said Holland. "I am in this game because I loved it as a young man and I am happy to have been able to stay in the game."

In the Player Category, five individuals were elected.

Slovak native, Marian Hossa, was the Ottawa Senators’ first round selection in the 1997 NHL Entry Draft. After seven seasons in Ottawa, he then had stints with three other NHL teams before playing his final eight seasons with the Chicago Blackhawks. With the Blackhawks, Hossa won Stanley Cups in 2010, 2013 and 2015. Overall, in 1309 NHL regular season games, he recorded 525 goals and 609 assists.

"This honour means so much to me," said Hossa. "I would like to thank everyone who voted for me. I have learned so much about life through the game of hockey and am very appreciative of this recognition."

Jarome Iginla played over 15 seasons with the Calgary Flames from 1996 – 2013 and led the team in scoring during 11 of those seasons. A three-time NHL First All-Star Team member, the Edmonton (AB) native recorded 1300 points in 1554 NHL regular season games (on four NHL teams). He also was a member of Team Canada at three Olympic Games, winning gold medals in 2002 and 2010.

"This selection is hard to believe and makes me reflect and look back on my career," said Iginla. "I was always just trying to make the NHL and this recognition means a lot to me and my family."

Drafted by the Edmonton Oilers in the first round in the 1979 Entry Draft, Kevin Lowe would go on to play 13 seasons with the Oilers, winning five Stanley Cup championships. After being traded to the New York Rangers in 1992, Lowe played four more seasons adding a sixth Stanley Cup in 1994.

"I think I perhaps represent the next level of guys who helped to win championships," said Lowe. "I appreciate that my contributions to the teams I played on are being recognized in this way."

A native of Chateauguay, Quebec, Kim St-Pierre played boys’ hockey until she was 18 years of age. From there she played on the women’s team at McGill University and began her storied career in the CWHL and representing Canada on the international stage. Backstopping the Canadian Women’s National team, St-Pierre won three Olympic gold medals and five World Women’s Championships Gold Medals. While playing for Canada she posted a career 1.17 GAA and a 0.939 save percentage.

"Hockey has always been my passion and this is a very special honour," said St-Pierre. "When I was growing up it was only boys and when that changed my dream was able to come through. I’m grateful and would like to thank all of my coaches and my family."

Doug Wilson was the 7th overall selection by the Chicago Blackhawks in the 1977 Amateur Draft. He would play 14 seasons with the Blackhawks, leading all team defencemen in scoring for 10 consecutive seasons. Traded to the San Jose Sharks in 1991, he played his final two seasons with the team before later moving over into team management. In 1024 NHL regular season games, Wilson recorded 237 goals and 590 assists.

"I’m not even a Hall of Famer in my own house, so joining this club means the world to me," said Wilson. "I would like to thank all of the people who have been so good to me in this game."

The 2020 Hockey Hall of Fame Induction Celebration is tentatively scheduled on Monday, November 16th in Toronto (preceded by the traditional slate of “Induction Weekend” events beginning on Friday, November 13th, including the annual “Hockey Hall of Fame Game” hosted by the Toronto Maple Leafs). Due to the continued fluidity of developments surrounding the COVID-19 pandemic (including the NHL’s Return to Play Plan, etc.), the Hall of Fame is not accepting ticket orders for the 2020 Induction events at this time. Stay tuned for further announcements in the upcoming weeks which will be posted via HHOF.com and other HHOF social media platforms. 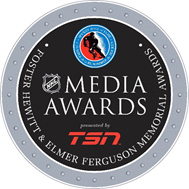 Tony Gallagher is the first writer to win the award for a body of work exclusive to the Vancouver market. He became one of hockey’s most influential voices in Western Canada in a career at The Province that spanned from 1970 - 2015. He was recruited by The Province out of the University of British Columbia in 1968. He was hired full-time in 1970 on high school sports before making the jump to hockey, covering the WHA's New Westminster Bruins and then the WHA's Vancouver Blazers. By 1976, Gallagher graduated to become the paper's lone beat writer on the Canucks. He was promoted to general columnist in 1987, where he continued to break news and stir the pot, and covered nearly 25 Stanley Cup Finals - including all three Canucks appearances.”

“Tony Gallagher owned the Vancouver market in a time before the internet, when scoops lasted for 24 hours in a newspaper world where contact meant everything,” Seravalli said.  “He was uber-connected and over time became the voice for Western Canadian market that has always seemed to have a chip on its shoulder, sitting three time zones away from Toronto.  Tony was the perfect writer for that constituency, never afraid to break a few eggs in writing his daily omelette.  He fought for Canucks fans against perceived injustice by both the League or their team, becoming a media icon in his city and beyond.”

Rick Peckham had broadcast professional hockey for 42 years before his retirement following the 2019-2020 season.  For the last 24 seasons, he was the TV play-by-play voice of the Tampa Bay Lightning, joining the organization in 1995.  Prior to that, he served in the same capacity for the Hartford Whalers for 11 seasons.  During his illustrious career in the NHL, he has received four local Emmy Awards for his work on Fox Sports Sun and Sportschannel New England.  The 1977 graduate of Kent State University served as the radio/TV voice of the Rochester Americans of the AHL for seven years.

"I have known Rick for 36 years, since his days covering the Hartford Whalers”, said Kaiton.  "Rick has had a most distinguished hockey broadcasting career, which deserves to be recognized by this honour.  His longevity and excellence tell the story and passion for his profession came through each broadcast."

Gallagher and Peckham receive their awards at a luncheon tentatively scheduled on Monday, November 16th and their award plaques will be displayed in the Esso Great Hall at the Hockey Hall of Fame alongside past award recipients.

Recipients of these awards, as selected by their respective associations, are recognized by the Hockey Hall of Fame as “Media Honourees” ─ a separate distinction from individuals inducted as “Honoured Members” who are elected by the Hockey Hall of Fame Selection Committee.  This year’s inductees into Honoured Membership were announced on Wednesday, June 24, 2020.

The 2020 Hockey Hall of Fame Induction Weekend is tentatively scheduled on Monday, November 16th in Toronto (preceded by the traditional slate of “Induction Weekend” events beginning on Friday, November 13th, including the annual “Hockey Hall of Fame Game” hosted by the Toronto Maple Leafs).  Due to the continued fluidity of developments surrounding the COVID-19 pandemic (including the NHL’s Return to Play Plan, etc.), the Hall of Fame is not accepting ticket orders for the 2020 Induction at this time.  Stay tuned for further announcements in the upcoming weeks which will be posted via HHOF.com and other HHOF social media platforms.

Named in honour of the late Montreal newspaper reporter, the Elmer Ferguson Memorial Award was first presented in 1984 by the Professional Hockey Writers’ Association in recognition of distinguished members of the hockey writing profession whose words have brought honour to journalism and to the game of hockey.

Named in honour of the late “Voice of Hockey” in Canada, the Foster Hewitt Memorial Award was first presented in 1984 by the NHL Broadcasters’ Association in recognition of members of the radio and television industry who have made outstanding contributions to their profession and to the game of hockey.

TORONTO (August 10, 2020) — Lanny McDonald, Chairman of the Hockey Hall of Fame, announced today that the 2020 Hockey Hall of Fame Induction Weekend/Celebration has been postponed until further notice due to continuing consequences of the COVID-19 pandemic.

Rescheduling plans for the 2020 Induction Celebration will be addressed when the Hall's Board of Directors meet on October 29, 2020. "While it's possible the class of 2020 could be inducted on alternative dates during the modified 2020-21 NHL season, the most likely scenario is to postpone to November 2021, either by waiving the 2021 elections or in combination with the 2021 induction class involving adjusted category limits," said McDonald. "Since the magic of the induction from the Honoured Members' perspective is experiencing several days of close interaction with family, friends, former teammates and fans, the Board ruled out any means of holding the 2020 inductions virtually."