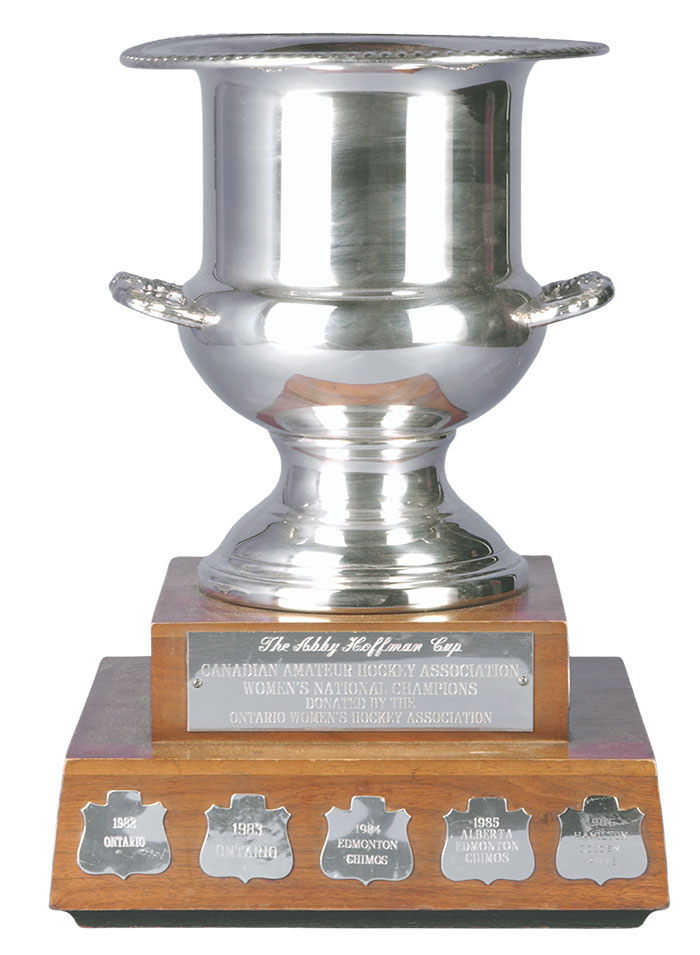 This Abby Hoffman Cup was introduced in 1982 at the first Canadian National Women's Hockey Championship held in Brantford, Ontario where the Ontario Women's Hockey Association unveiled this trophy to be presented to the gold medallists.

Abby Hoffman is a noted sports figure across Canada and played minor hockey on a boys team until it was discovered that she was a female. The story broke and made headlines around the world as Abby aroused the hockey realm's attention by displaying that females would like the opportunity to play hockey. In her later years, Abby assisted the CAHA and the Branches in implementing a national women's hockey championship. As a result, it was the birth of the annual senior 'A' women's hockey championship, with representation from each province vying to win this prestigious trophy. 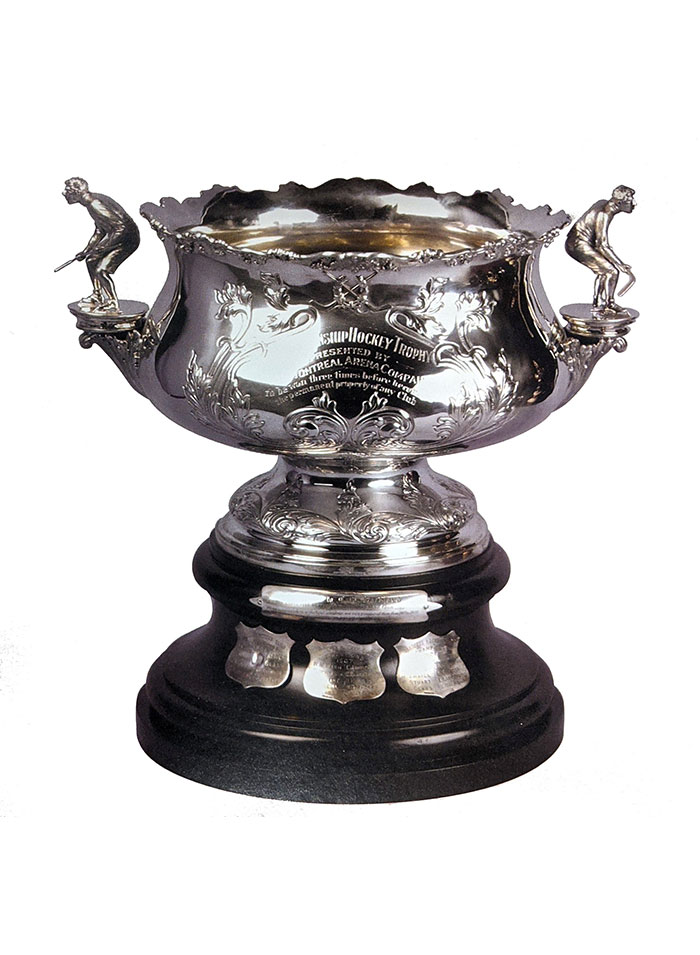 The Arena Corporation of Montreal. presented the newly-formed Association the "Arena Cup" which was to be awarded annually to the league champion.

Manufactured by Birks and handcrafted by early silversmiths using sterling silver, the 90-ounce trophy was adopted as the new league's centerpiece.

The league's only winners were the Montreal Wanderers who incidentally won the Stanley Cup the same years.

The AVCO World Trophy was given yearly to the championship team of the World Hockey Association (WHA). The trophy was donated to the new league in 1972 along with approximately $500,000 by the AVCO Financial Services Corporation. Thus the WHA became the only major sports league to have its championship trophy bear the name of a private corporation. There actually exist three AVCO trophies. Besides the one that is on display at the Hockey Hall of Fame, the others reside in Nova Scotia and Winnipeg. The Avco Trophy was retired after the WHA ceased operations in 1979. The Bobby Hull led Jets claimed the trophy on three ocassions while Gordie Howe and the Aeros won it twice. 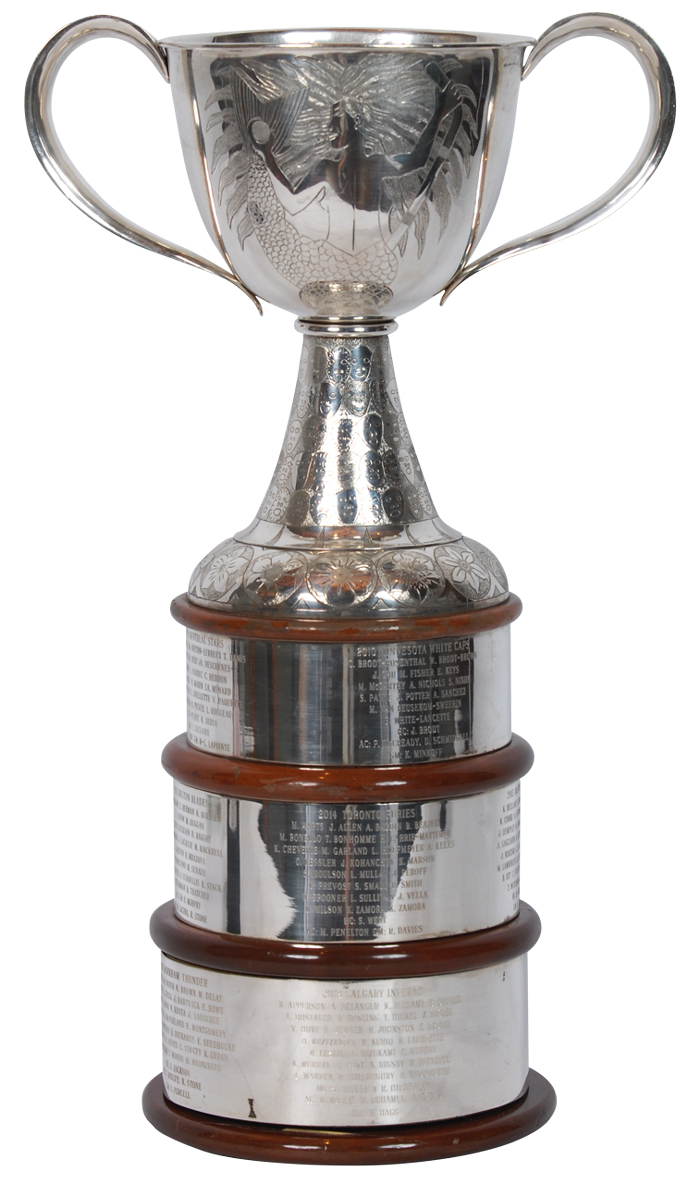 The Clarkson Cup, named after former Governor General of Canada Adrienne Clarkson (1999 to 2005), has served as the Canadian Women's Hockey League championship trophy since 2009. The champion is regarded as the top women's team in the country and the trophy viewed as the Stanley Cup of women's hockey.

The trophy itself consists of a loving cup, which on one side is engraved with the coat of arms of Governor General Clarkson, and the other side features Inuit goddess Sedna holding a hockey stick and puck. Engravings of arctic animals adorne the handles, while the pedestal is covered with ancient masks and the base with flowers of each province and territory of Canada. The Clarkson Cup was designed by Nunavut Arctic College with Inuit artists Okpik Pitseolak, Pootoogook Qiatsuk and Therese Ukaliannuk, and silversmith Beth M. Biggs. 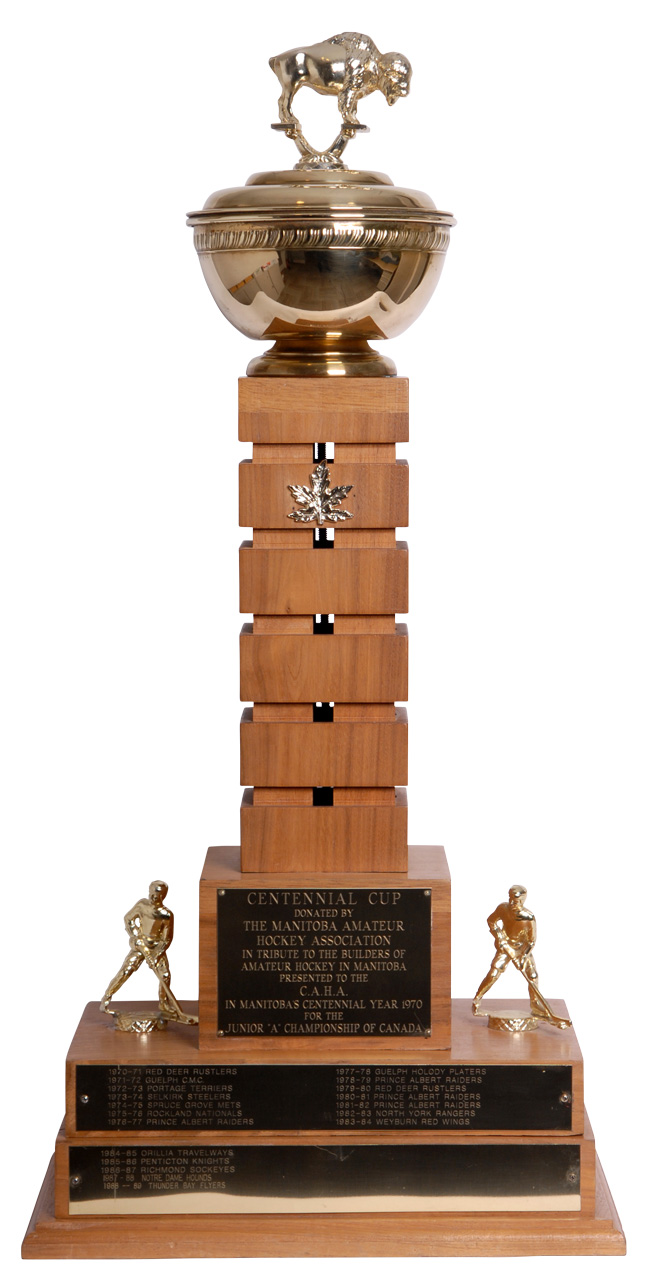 The Manitoba Centennial Trophy was presented to the Canadian Amateur Hockey Association (CAHA) by the Manitoba Amateur Hockey Association to commemorate their centennial year of 1970. It was in that year that the CAHA reconfigured their junior tier, creating two separate classifications - Major Junior and Junior "A." The Major Junior class encompassed the teams that made up the "Canadian Major Junior Hockey League" while the Junior "A" section included the remaining junior teams within the association. With the Memorial Cup established as a trophy exclusively for teams in the "Canadian Major Junior Hockey League", the Manitoba Centennial Trophy served as the trophy for the champions of this new Junior "A" division.

The Red Deer Rustlers of the Alberta Junior Hockey League defeated the Charlottetown Islanders in 1971 to claim the inaugural Canadian Junior A Championship and Manitoba Centennial Trophy, often referred to as the "Centennial Cup."

In 1996, the Canadian Hockey Association introduced the newly named Royal Bank Cup for teams in the "Canadian Junior A Hockey League." 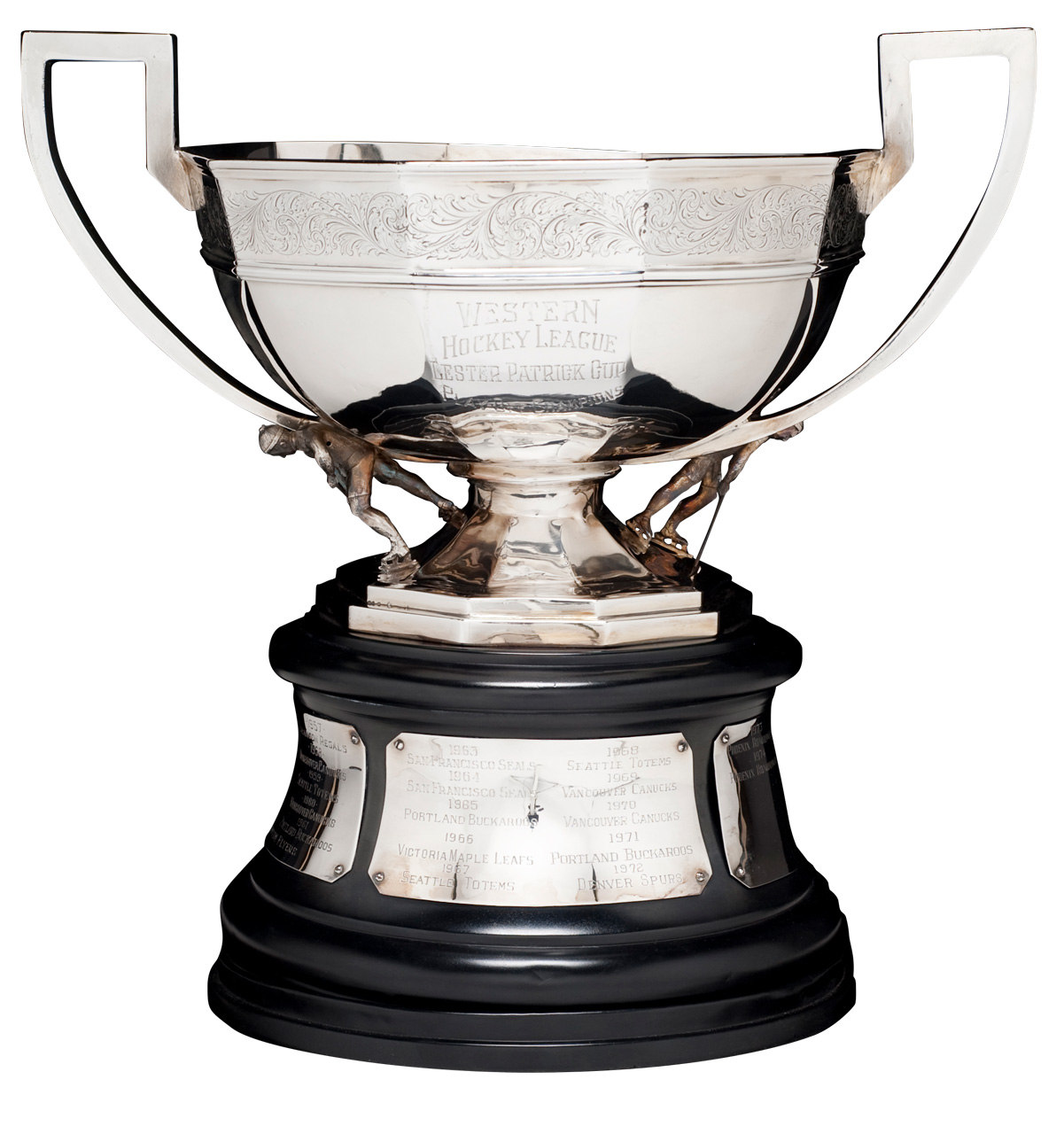 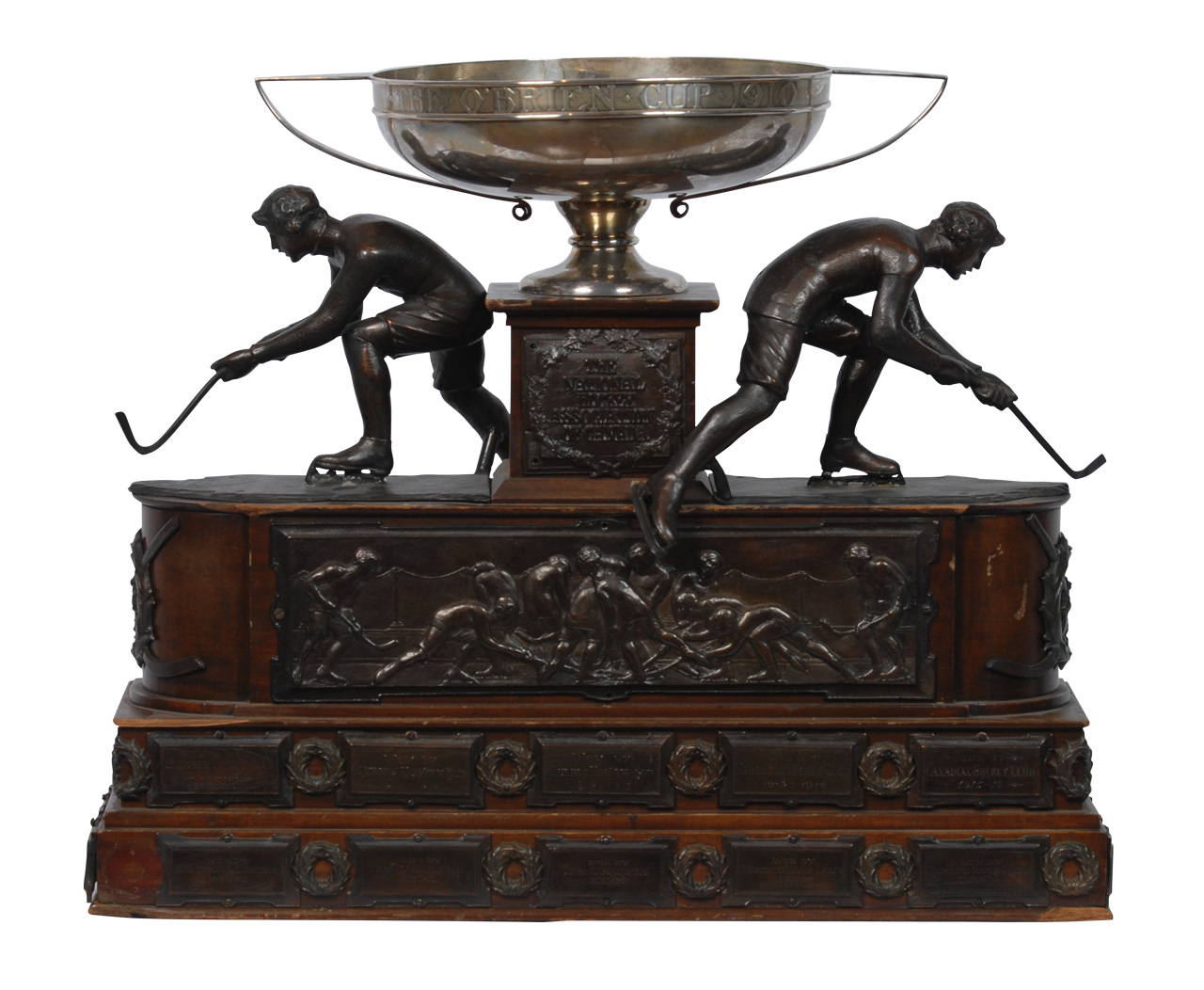 The O'Brien Trophy was donated to the National Hockey Association by its' name sake Senator J. O'Brien in recognition of his son J. Ambrose O'Brien, in 1910. The trophy was to be emblematic of the championship of the league.

J.A. O'Brien had hockey in his blood. He participated at all levels of the game - as a player, financier and founder. He almost single-handedly organized the National Hockey Association and helped launch one of the most famous teams in NHL history - the Montreal Canadiens.

After the demise of the National Hockey Association in 1917, the trophy was taken over by the National Hockey League and awarded to the league champions. Upon the donation of the Prince of Wales Trophy to the NHL in the early 1920's, a decision was made by the league executive to retire the O'Brien Trophy. However in 1928, the O'Brien Trophy officially was awarded to the Canadian team with the most points.

The significance of the O'Brien Trophy was again altered in 1939, when it became the award handed out to the losing Stanley Cup finalist. Of note, the trophy was not formerly awarded between 1939 and 1943. It wasn't until 1944 that the teams from that five-year period had their names inscribed on the trophy. The O'Brien Trophy was officially retired by the NHL at the end of the 1949-50 season.

The Joseph Turner Memorial Cup was awarded annually by the Board of Governors of the International Hockey League (IHL) to the team winning the playoff championship.

The award was named after Joe Turner, a young Windsor, Ontario athlete who drew distinction as a quality amateur goalie in the Michigan-Ontario league. He turned professional with the Detroit Red Wings of the National Hockey League and played with Detroit's American Hockey League farm club in Indianapolis. He led the Capitols to the 1940-41 Calder Cup championship as the league's First Team All-Star goaltender. Joe Turner was killed in action on December 13, 1944 during World War II as a member of the United States Army.

The Turner Cup was officially retired when the IHL ceased operations in July, 2001. 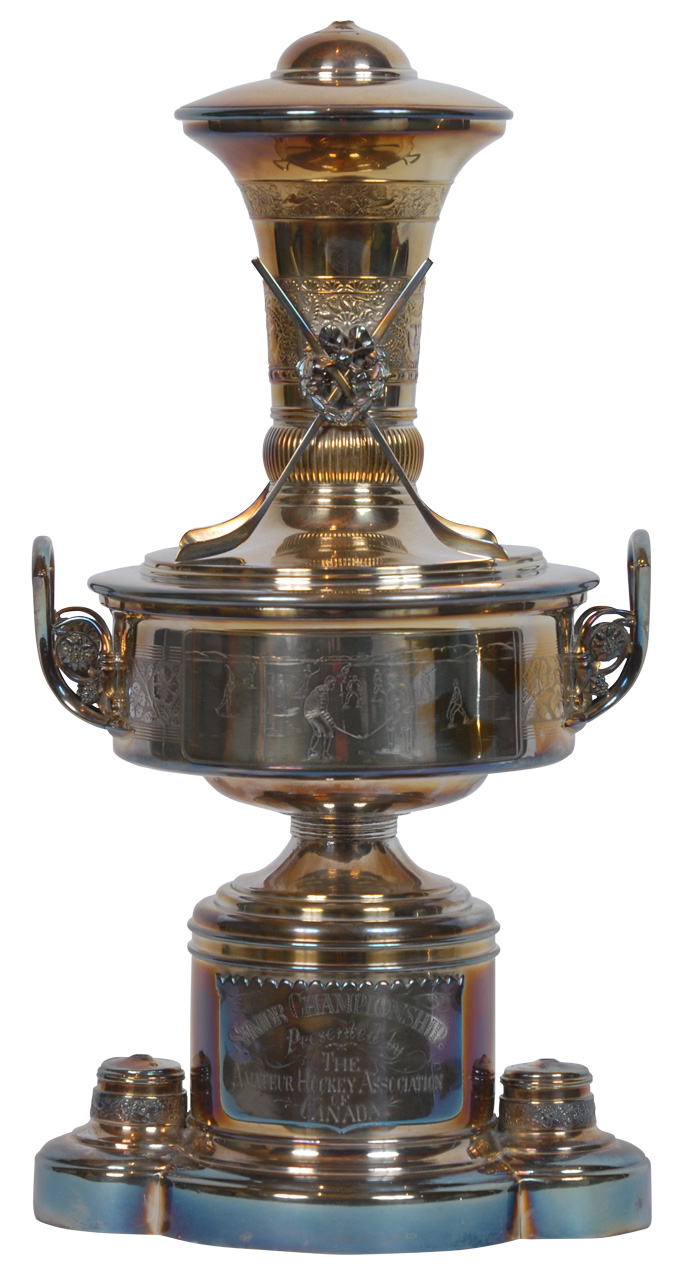 First awarded in 1891, the Senior Championship Trophy was awarded to the champions of the Amateur Hockey Association and became the premiere hockey trophy in Canada. It was known as the forerunner to the Stanley Cup.

This beautiful silverware was designed with hockey scenes on its middle bowl as well as an inscription quoting that if a team should ever win it three times, it would become that teams forever. Coincidentally the Montreal Wanderers won the trophy the first three years, thereby retiring the trophy from competition. It was at this time that Lord Stanley donated the "Dominion Challenge Cup", more commonly known as the Stanley Cup.