Canada's national midget championship tournament was inaugurated in 1974, with competitors challenging for the Wrigley Cup. By 1979, the annual National Midget Hockey Tournament champions were awarded the Air Canada Cup. Today, the tournament involves five regional champions, derived from inter-branch playoffs, along with a host team comprising the sixth team in the annual competition. The winning team is awarded the newly-named TELUS Cup. 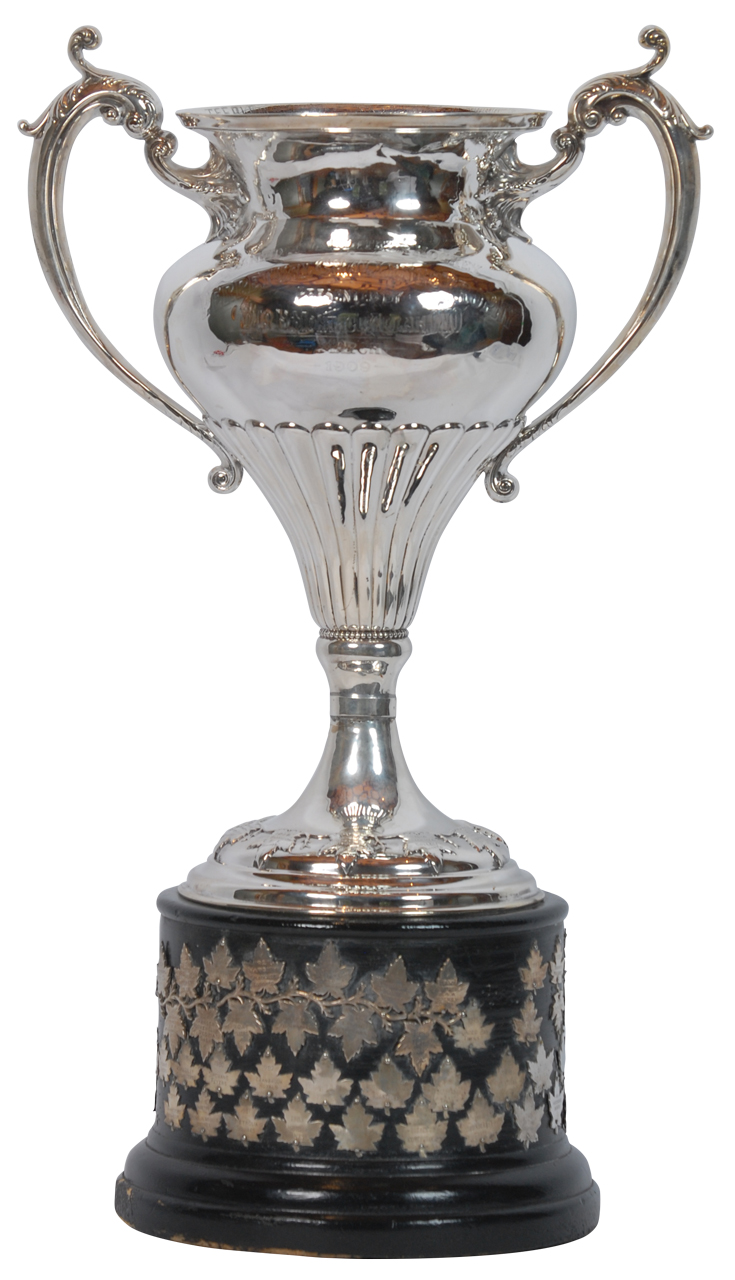 The Allan Cup was donated by Sir H. Montague Allan, C.V.O. shortly after the Stanley Cup became the championship trophy of the professional hockey clubs.

While the Stanley Cup originated as an amateur trophy, the proceeds from the Cup games went to the competing teams. This led to abuses of the principles of amateurism as clubs gathered star players from all parts of the country, regardless of cost, knowing that if they got into a Stanley Cup series their share of the receipts would take care of the extra expenses in building up a championship team. As a result Mr. Northey prevailed upon Sir Montague to offer a trophy for the encouragement of the amateurs, and to safeguard it with such rules and regulations as to prevent it from ever becoming a menace to the sport it was designed to foster. It was decided to make the cup a challenge trophy open to any senior club having won the championship of its league that year. The surplus proceeds after paying the legitimate expenses of the competing teams to be given to charity.

Interest in the Allan Cup became greater each year until the challenges became so numerous that it was impossible for any team holding the Cup to defend it against all those clubs sending in challenges.

The Canadian Hockey Association was formed in 1914 with branches in the Provinces of Quebec, Ontario, Manitoba, Saskatchewan, Alberta, and British Columbia. The "Allan Cup" was accepted by the association as the trophy emblematic of the senior amateur hockey championship of Canada.

In 1984, the classification of teams competing for the Allan Cup was changed to Senior AAA. 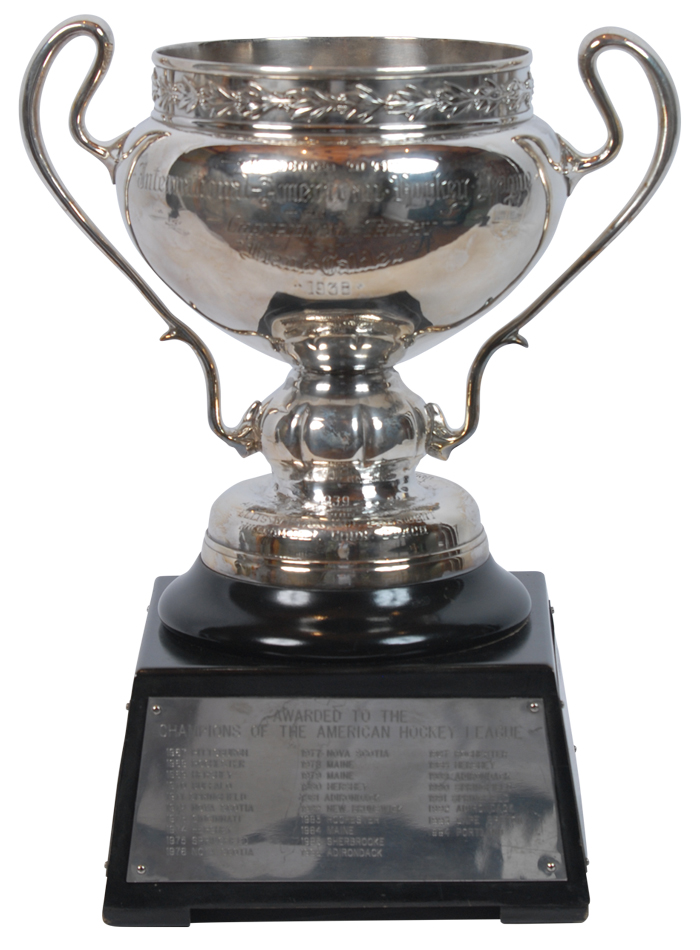 The coveted Calder Cup has been a motivational force for American Hockey League teams throughout the League's history and is awarded annually to the AHL playoff champion. The trophy is named for Frank Calder, who served as the National Hockey League's first President from 1917 to 1943. During the 1920's, Mr. Calder was instrumental in guiding hockey into the mainstream of American's major cities including Boston, New York, Detroit and Chicago, while helping in the formation of the American League.

A total of 21 different cities have had their AHL member club win the Calder Cup, including the Cleveland Barons, who played in the AHL from 1936 to 1972 and won a record nine championships. The Hershey Bears have the most championships of active franchises with nine, the first in 1947 and the most recent in 2006. 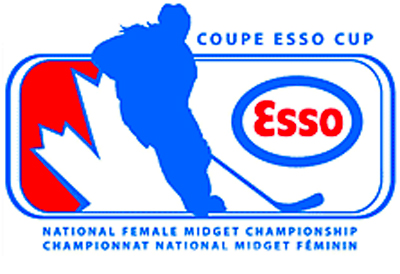 The Esso Cup, Canada's national women's midget championship tournament, was inaugurated in 2009 in Calgary Alberta, with the Westman Wildcats emerging as the first gold medalists. Today, the tournament is held in a different location each year and is comprised of five regional champions as well as the hosting team who compete for the Esso Cup.

The Lester Patrick Trophy was presented by the New York Rangers in 1966 to honour the late Lester Patrick. Patrick was a longtime general manager and coach of the Rangers, whose teams finished out of the playoffs only once in his first 16 years with the club. 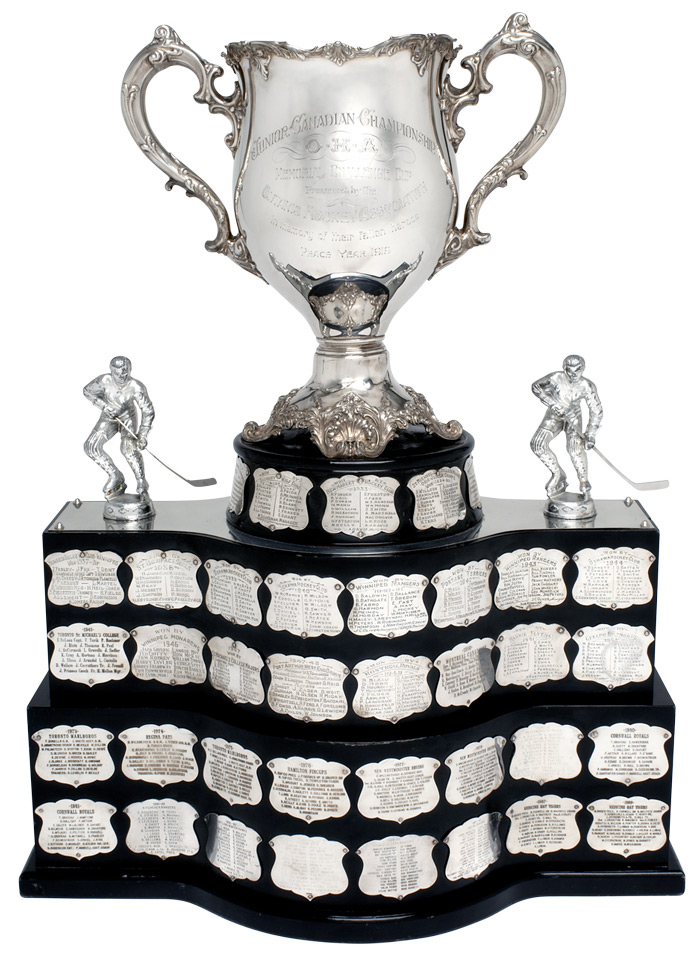 The Memorial Cup was originally known as the OHA Memorial Cup and was donated by the Ontario Hockey Association in March, 1919, in remembrance of the many young men and women who paid the supreme sacrifice for Canada in the First World War.

Initially the Cup was awarded to the national junior hockey champions of Canada. Later on it came to signify Junior 'A' hockey supremacy when in 1934, junior hockey in Canada was divided into 'A' and 'B' classifications. In 1971, junior 'A' hockey was divided once again to form a major junior and a Tier 'II' level. The Memorial Cup was awarded to the higher category. In 1972, a round-robin tournament format replaced the old play-down system to determine the champions. Since then, the champions of the Western Hockey League (WHL), the Quebec Major Junior Hockey League (QMJHL) and the Ontario Hockey League (OHL), along with a host club, have met each spring in a round-robin series with the two top teams playing off in a sudden-death game to determine the Cup champions. 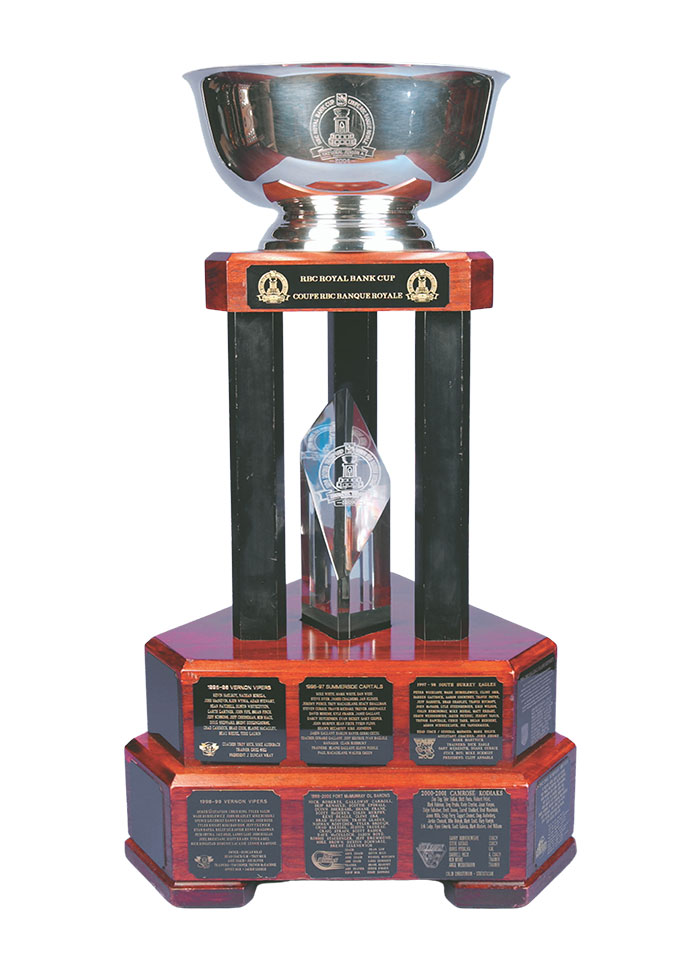 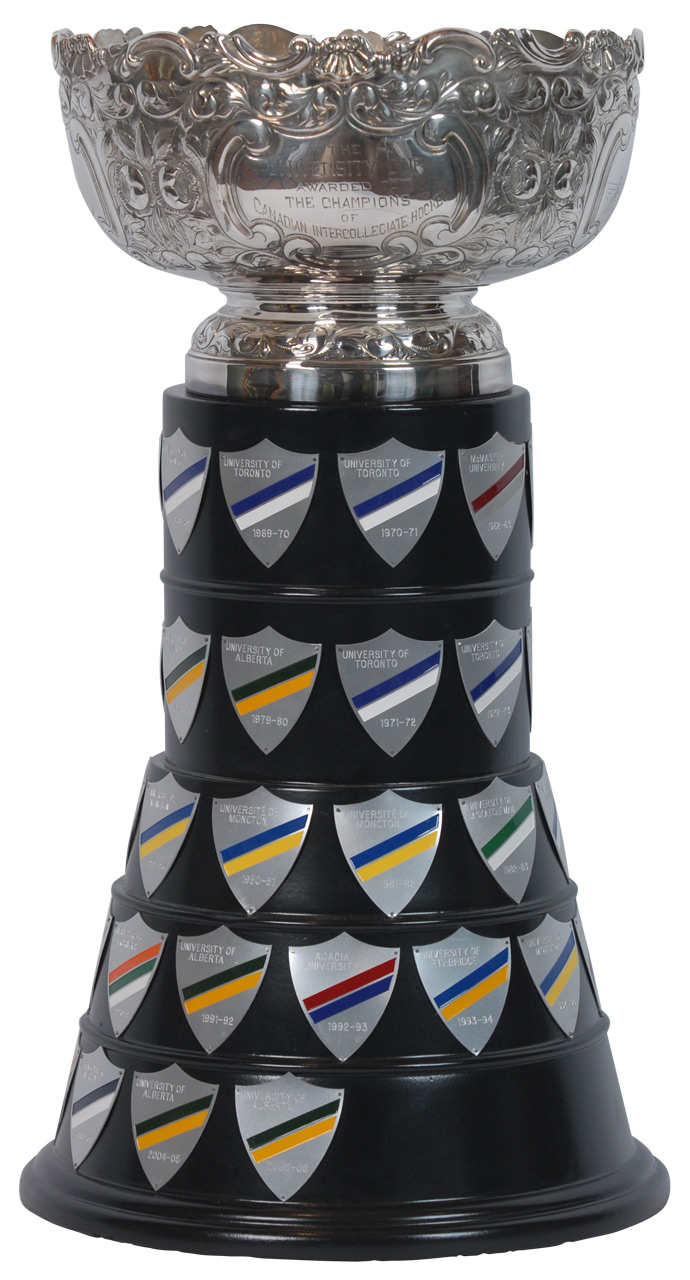 The trophy was first presented by Queen's University of Kingston and the Royal Military College of Canada in 1962. Both teams participated in the first organized interuniversity hockey game played in Kingston in 1885. The Trophy was presented in recognition of the contribution made to the game of hockey by outstanding university players.

Today, the David Johnston University Cup is an annual tournament held in the spring with representative U SPORTS teams from each region across Canada. 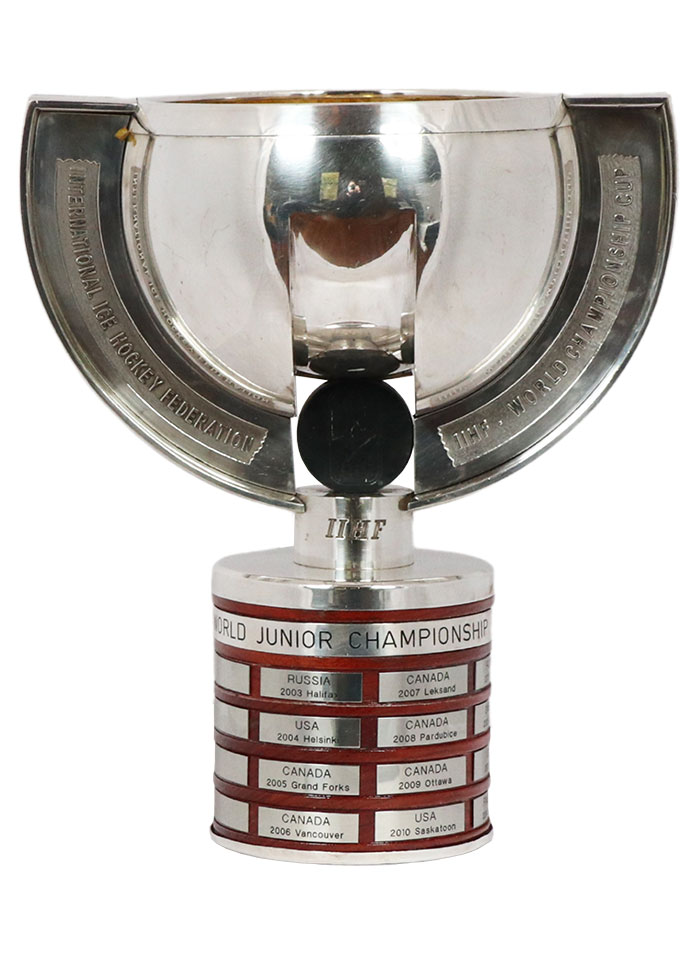 This premier junior hockey event has been held annually by the International Ice Hockey Federation (IIHF) since 1977. In the tournament's formative years, eight nations competed for top honours with two in particular dominating the gold medal haul, namely Canada and the former Soviet Union. In fact, the Soviets won seven of the first 10 titles and the Canadians winning seven times in the 1990s.

The IIHF presents their Championship plate to the winning team after the gold medal game. Each year a new plate is awarded to the victors, thus allowing the winning nation to keep, preserve and showcase their achievement. 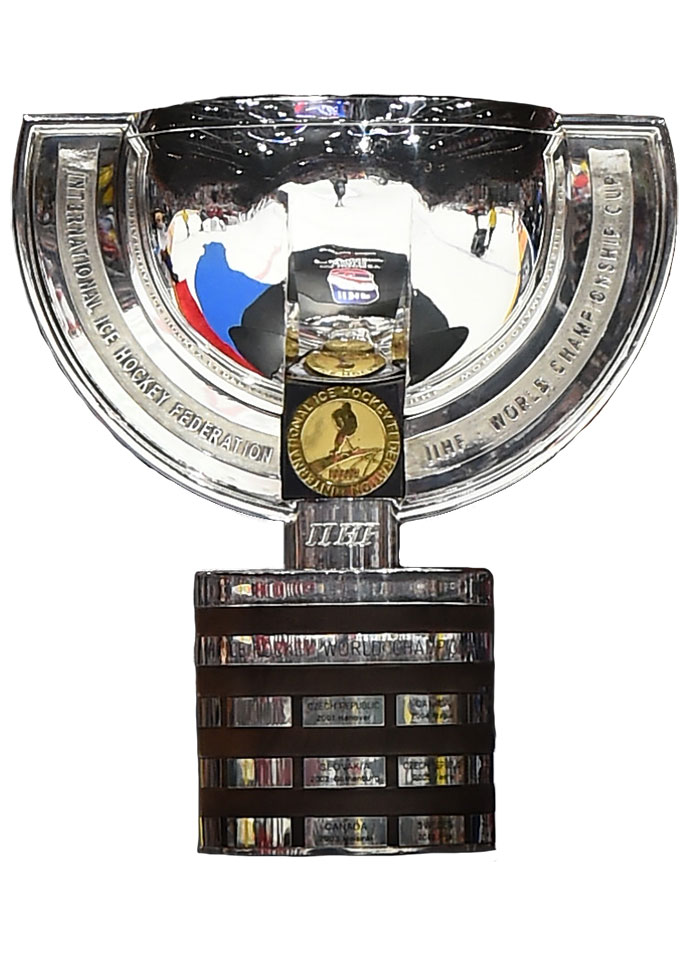 Over the years, the International Ice Hockey Federation has declared a world champion in men's ice hockey, either in conjunction with the Winter Olympics or as today, a separate event. Through time, the number of competitors has increased and the game has evolved, much like the World Championship trophy. With older trophies of this illustrious tournament retired from circulation, a new version was unveiled during the 2001 event.

The designer, Andre Richard, created this award to compliment the World Championship's history and prestige. The handmade trophy weighs over 10 kilos and sports a silver and gold top portion and a base comprised from the precious woods ebony and bobinga. 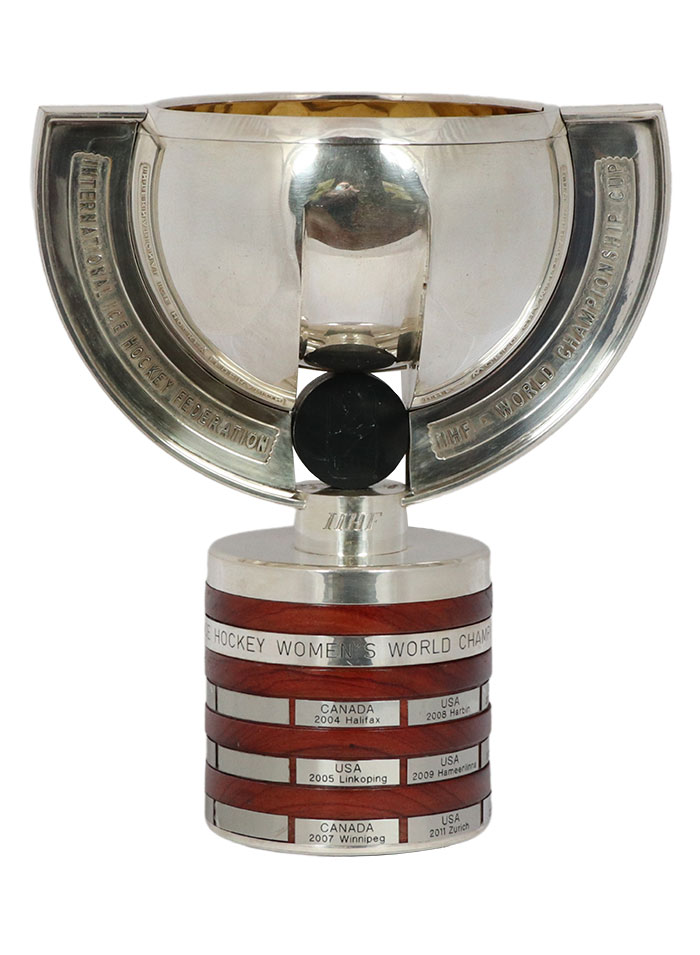 The Women's World Championship is a relatively new event, having staged its first competition in 1990. This tournament, initially held every two years, grew in stature that precipitated not only the need for an annual tournament but also separate tiers to accommodate additional competing nations.

While there have always been eight to nine teams vying for women's hockey supremacy, every gold medal game has featured the two perennial powerhouse teams of Canada and the United States. Canada's streak of eight straight (nine unofficial) world titles ended this past year with the Americans winning in a shoot-out.

Each winning team receives and keeps a championship plate to symbolize their victory in women's hockey at its highest level. 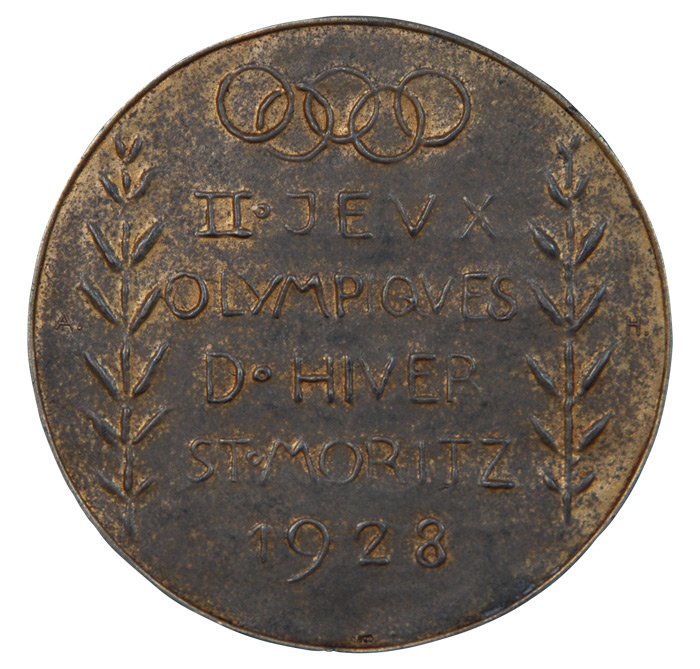 Any athlete will tell you that it is the ultimate honour to represent one's country at the Olympics. Few will further dare to dream about claiming a medal in their discipline. Held every four years, this event matches up the world's very best, especially with the recent inclusion of NHL players.

Unlike, many trophies that only remain in possession of the champion until the following year, Olympic medals are uniquely manufactured for this one time event, including the event logo, further adding to its exclusivity for each participant. Also, the composition of each medal accentuates its value, with amounts of gold, silver and bronze providing even more luster. 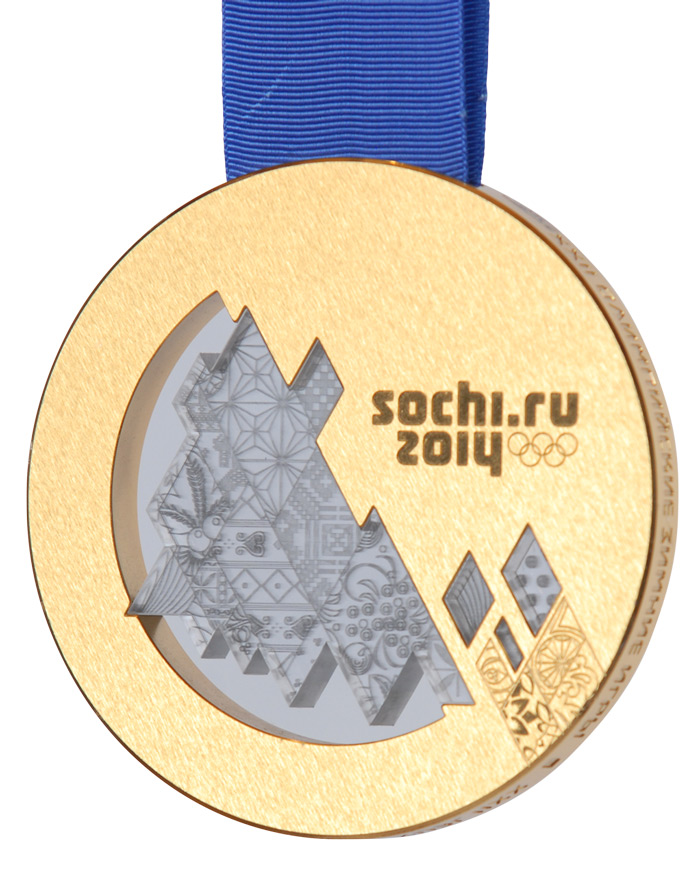 The fastest growing sector of hockey over the past decade has been women's hockey. After two very successful decades of international women's play at the World Championship level, women's hockey expanded into the Winter Olympic scene in 1998. Despite the Canadians' undefeated record at the previous five World Championships, the United States stormed by the Canucks to capture the first-ever Olympic gold medal in women's ice hockey.

Olympic medals are uniquely manufactured for this one time event, including the event logo, further adding to its exclusivity for each participant. In addition, the composition of each medal accentuates its value, with amounts of gold, silver and bronze providing even more luster.

The Spengler Cup is the oldest European tournament for club teams. The Cup was donated by Dr. Carl Spengler of Davos, Switzerland in 1923 with the understanding that Germany and Austria would be able to represent themselves internationally with the best club teams. (At the time, those country's national teams were banned from official International Ice Hockey Federation competitions in the wake of World War I).

The Spengler Cup is played every year in Davos, Switzerland between Christmas and New Year's Eve. Five teams participate in the tournament, with a select team from Canada usually included. (Canada first competed at the Spengler Cup in 1984). The Rochester Americans of the American Hockey League were the first North American professional team to compete at the tournament when they took part in 1996 and finished fourth.

After a round-robin series, the top two teams meet in the final game.